Why You Drink (or Don’t Drink) Coffee 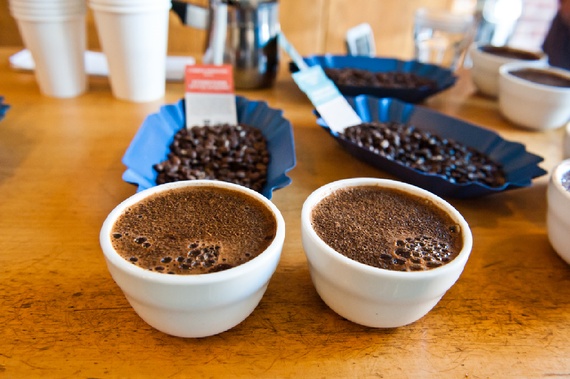 I noticed this on my third cup this morning: Andrew Giambrone writing in The Atlantic says new research seems to suggest that coffee drinking isn’t as much a personal choice as a genetic choice.

A study released last Tuesday by an international consortium of caffeine scholars may help explain why some of these customers visited more often than others. Spearheaded by Marilyn Cornelis, a research associate at the Harvard School of Public Health, the team investigated the link between genetics and coffee consumption. By analyzing DNA as well as data on 120,000 adults of European and African-American heritage, the researchers identified eight genetic variants that predispose individuals to seek out and drink caffeine.

“Our results show that people are naturally consuming the amount of coffee that allows them to maintain their optimal level of caffeine” to get that good caffeine feeling without becoming jittery, Cornelis told me. “If we need more, we’re reaching for it.”

It turns out that drinking coffee is really good for your general health, both physical and mental. Coffee drinkers are significantly less likely to die or commit suicide than those who don’t drink coffee.

By using data from the National Institutes of Health (NIH)-AARP Diet and Health Study, which involved more than 400,000 participants and 52,000 deaths, the researchers found that those who drank coffee were less likely to report having diabetes, or to perish from “most major causes of death in both men and women, including heart disease, stroke, injuries and accidents, diabetes, and infections.” Overall, people who drank at least two cups of coffee a day had a 12.5 percent lower chance of dying during the 14 years in which the study was conducted than those who didn’t. Still, the same study found that coffee-drinkers were more likely to smoke, and that drinking coffee did not have a significant effect on cancer incidence. Likewise, a study published in 2013 by researchers at the Harvard School of Public Health linked coffee consumption to a 50 percent reduction in suicide risk among both men and women.

If you’d like to learn more about the health benefits of coffee, check out Gerard Paul’s post on the Health Effect of Coffee on ManyEats.com. In fact, I think I’ll pour another cup.