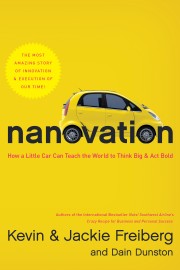 Nanovation: How A Little Car Can Teach the World to Think Big and Act Bold

In Nanovation, Dain Dunston joins best-selling authors Kevin and Jackie Freiberg to take you behind the scenes and show you how, in the face of insurmountable odds, Tata Motors created one of the greatest innovations in the auto industry since the Model-T. More than the story of one car, Nanovationis the story of a diverse and far-reaching movement in business and design that is radically changing the way we think about products and the companies that make them.

Nanovation starts a revolution. It doesn’t matter what industry you are in, someone, somewhere right now is building a product, process or business model designed to kick your butt. How? By producing change that matters, someone is going to redefine what it takes to succeed in your business. Someone is going to start the revolution that will change your world. Why not you?

“Quite simply the most practical book about innovation I’ve ever read.”

“Nanovation not only captures the story of an impossible dream come true; it shows us that what is good for business can and should be good for the world. If you’re interested in stoking the fires of innovation and making a profit while making a difference, Nanovation is a must read.” 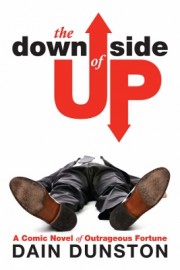 The Downside of Up: A Comic Novel of Outrageous Fortune

Yes, it’s a novel. Yes, it’s funny. And yes, it’s a business book. The Downside of Up is a great business case study of how to turn a failing company around, tracking the best current management and leadership presence theory. It also happens to be a real page-turner and great airplane reading.

DOWNSIDE tells the story of Paul Lavallier, a 43 year old corporate speechwriter, who makes a joke at a cocktail party that his dream job is to be a failed CEO, since that’s where the real money is. To his surprise, someone takes him up on it. To his (and everyone else’s) surprise, it turns out he’s pretty good at it. All he has to do is go down with the ship and collect his big payoff.  But when he discovers the deal will cost thousands of people their jobs, he can’t help himself: he starts trying to rewrite the script. But fixing things might kill the deal and powerful people can’t let that happen. The question is, does he have the leadership chops to do it?

“The Downside of Up is classic Dunston. It unleashes the creativity of a novelist, the provocative insights of a thought leader who has coached many of the top executives in the world, and the compassion of a sensei who deeply cares about the human condition, for Dunston is all three. This riveting story is loaded with all the lessons of a Harvard case study, but delivered with the kind of humor that will entertain you throughout. The business literature is ripe with short fables, but here, Dunston has broken new ground—read it and laugh.”