On the Role of Leadership in a Shape-Shifting World

The communicator’s dilemma: leading the leaders. 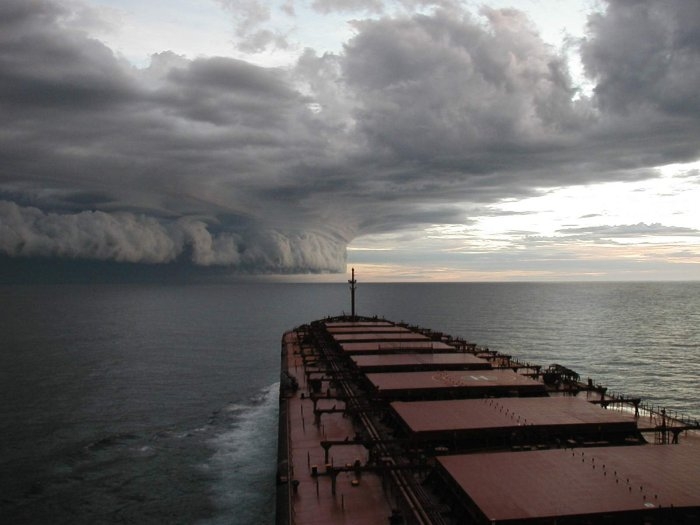 The communication of leadership is the most important thing you can work on in a company, because everything else depends on getting that right. This is critical, because we are at a “leadership inflection point” that’s caused by our increased consciousness of global cause and effect. We live in an age when we have had real consensus on the idea of purpose-based leadership, at least in the best companies. It’s an age when ideas of servant leadership, emotional maturity and diversity mean something, where they aren’t laughed at. It’s a time when people talk about “authentic leadership” with honest intent.

We’ve seen this before in history. It never ends well.

We’ll see which kind of leaderships wins in the long run, but right now this is the communicator’s dilemma: to coach our leaders in the right direction, when they’re being bombarded by alternative theories of value. Yes, we have to make the quarterly numbers and all the metrics, but we won’t do that without the communication of authentic leadership. The business leaders we work with have to be able to talk about a lot more than their Q1 free cash flow. They have to talk about their organization’s place in the world. And they need us to be able to frame the story of the organization as a positive force for good, as a force to be trusted, a force to be respected.

My father was a CEO back in the 70s and watching him rise up through the corporate world to get that position is what convinced me I never wanted to work in the corporate world. He worked in aluminum (“The bright star in metals!”) and spoke frequently at conferences. He wrote his own speeches, mostly bullet points on a card. When I ask him what his speeches were about, he said it was mainly about what to do about third quarter inventories of aluminum billet. He said it was deadly boring and he would have preferred to do what I do.

When my father was a CEO, business leaders lived and spoke about “the business world.” Today’s CEO lives and speaks in “the real world” from a business perspective. Because we have a better understanding of how business is connected to human outcomes. Today, too much is at stake and we see it. We can’t ignore “cause and effect.”

But even that’s not enough in this shape-shifting world we’re writing and communicating in. In the future – which starts now — leaders will need to live and speak in “a better world” of human outcomes globally. Because the costs are too visible to ignore. 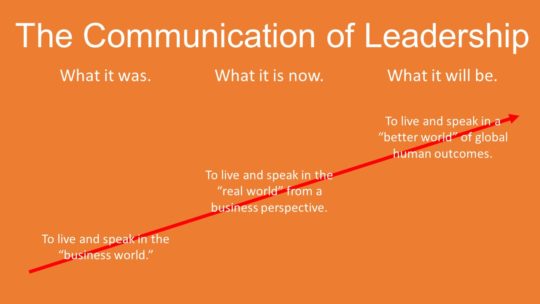 That’s why the communication of leadership is so important. In fact, communication is the very “act” of leadership. A leader who can’t communicate why and how we’re going to storm the castle (and win) is not a leader. I don’t mean to suggest that working in the communications department is the most important job. I mean communicators, in partnership with their business leaders and CEOs, have the critical role of framing the “why” of the organization.

What’s different in this moment of history is this: CEO’s can’t just live in the “business world” anymore, like my Dad could. They have to live in the real world. They have to be responsible for their footprint in the real world. The first part of that is understanding that you do have a footprint, a footprint that extends far beyond your balance sheet. It’s economic, it’s societal, it’s historic.

I co-authored a book called Nanovation that was a 3-year case study on Tata Motors and the Nano, their attempt to get Indian families off scooters and into safe cars. The Tata Group is an interesting company. A hundred and fifty years ago, they decided it wasn’t good enough to make a profit. They saw that if India was ever going to be independent, somebody needed to build an industrial infrastructure and the British weren’t going to do that. So the Tatas made it their purpose to build that infrastructure. And build it profitably.

They made themselves into industrial Gandhis. And the payoffs for that purpose have been huge.
If you work for a company like that, that’s interesting. Communicating that purpose is important. Not just to customers, but to the world at large. You take a stand.

If you have Muslim employees or customers or do business in Muslim populations, you can’t clam up about a Muslim ban. Maybe the US can pull out of the Paris Accords but UPS can’t. GM can’t, or American Airlines, because they do business in the real world.

We live in interesting times. This moment in history requires a special type of leader and a special type of communicator by her side. Our job – our calling as speechwriters – is to help the best leaders frame the story of what great leadership means and what it stands for. Because we need leadership from our global corporate leaders now more than ever.