Marines Add Mindfulness to Their Arsenal 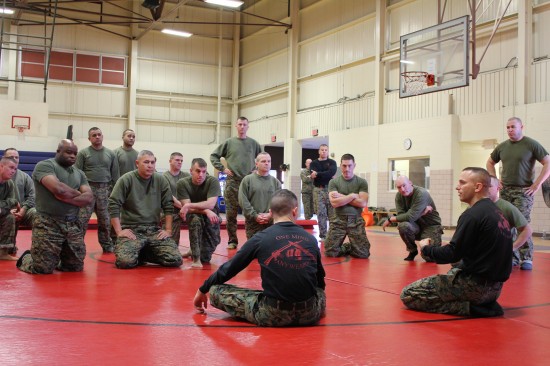 Mindfulness is one way of talking about the leadership trait of being completely in the present moment and powerfully observant of what’s in front of your nose. I center much of my coaching work around this skill and call it Leadership Presence.

Now the U.S. Marine Corps is experimenting with adding mindfulness to their training by putting Marines through meditation, yoga stretching and breathing exercises. They’ve done some pilot studies in simulated combat situations and discovered that Marines stayed calmer and more focused, were able to make better decisions and had less stress after the fact.

“The experiment builds on a 2011 study involving 160 Marines who were taught to focus their attention by concentrating on their body’s sensations, including breathing, in a period of silence. The Marines practiced the calming methods after being immersed in a mock Afghan village with screaming actors and controlled blasts to expose them to combat stress. Naval Health Research Center scientist Douglas C. Johnson, who is leading the research, monitored their reactions by looking at blood and saliva samples, images of their brains and problem-solving tests they took.

Another 160 other Marines went through the mock village with no mindfulness-based training, acting as the control group. Results from the 2011 study are expected to be published this spring.

Marine Corps officials decided to extend the experiment to shore up evidence that the exercises help the brain better react to high-stress situations and recover more quickly from those episodes.

“If indeed that proves to be the case, then it’s our intention to turn this into a training program where Marines train Marines in these techniques,” Bearor said. “We would interject this into the entry level training pipeline — we don’t know where yet — so every Marine would be trained in these techniques.”

For this to work, however, it will have to become part of the Marine Corp culture and be supported by leadership in the field all the time. A few days training in this won’t stick. It has to become a constant, conscious daily practice. But when it does, the results can be astonishing.