The Day I Went to the Nazi Rally 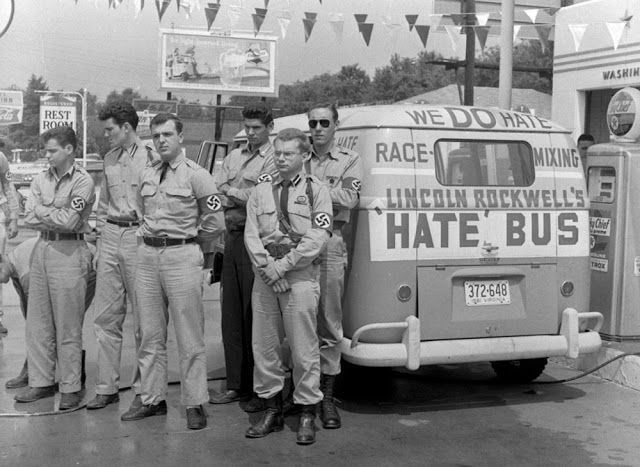 I didn’t go to praise Nazis. I went to bury them.

I didn’t know much. I was a naive college sophomore who could talk about Euripides and the Beatles but not much else. But I knew no one should ever celebrate Nazis. Not even Nazis themselves. And who were these Nazis? They were Americans who somehow had developed the idea that Germany’s National Socialists, led by Adolf Hitler, were on the right track, a track they thought could fix America. Or maybe they just thought the uniforms were sexy.

The year was 1968, a beaming blue day in the fall. I had dropped out of school and was working at a film lab, processing the evening news footage in the afternoon and girlie films the next morning. When I heard the American Nazi Party was planning a rally on the steps of the San Francisco City Hall, I decided I would join the protest against them.

The rally was already going on when I walked up Grove St. at the side of City Hall. I could see what looked like a large crowd in the Civic Center Plaza. And then, when I was maybe 75 yards from the corner, I saw the crowd surge and, like wild horses, start running down Grove Street toward me.

They were chasing a lone Nazi. He wore shiny black Gestapo leather, knee high boots and a shoulder belt. Right out of a World War II movie, with the red Swastika armband. But even with all that gear, he looked like he maybe weighed 120 pounds with his boots on. As he ran, he kept looking over his shoulder at the guys on his tail. And because he was looking at them, I don’t think he even noticed I was right in his path.

I could have stopped him. A punch in the nose and I could have clocked him to the pavement. But I didn’t do that. The message had already been sent and besides, I’m not a Nazi.

The crowd chasing the Nazis away that day was maybe half long haired students and half working men. Construction workers and longshoremen, maybe. World War II vets, the guys who fought the real Nazis and saw the fruit of their hate, would have been only 45 in 1968. They remembered and there was no way they were going to let Nazis get a foothold in America.

But that was then and this is now. And the Nazis who rampaged in Charlottesville last weekend are not a few clowns playing dress up. They’re a movement. There are thousands of them. They believe they have a mandate. They claim they own the White House.

That summer we ran the Nazis out of town was called “The Summer of Love.” The men who organized the Charlottesville rally are calling 2017 — I’m not making this up — “The Summer of Hate.” And their next stop, on the anniversary of 9/11, is Texas A&M University.

I’ll be there. Not to punch a Nazi, but to show that decency still matters in America.