How You Can Build Your Leadership Presence 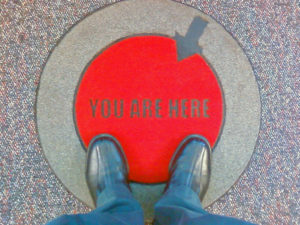 The speech didn’t start off well. We were in a Midwestern city at a trade group conference of equipment dealers, where I was working with an executive of a leading manufacturer who had just taken charge of his company’s dealer channel. Here he was, waiting to address the group – some of whom were not entirely satisfied with their relationship with the manufacturer – and the organizers of the event were fifteen minutes late getting started because they couldn’t figure out how to get the PowerPoint from their laptop to the screens. So, when the executive finally got the chance to start talking, the feeling in the room wasn’t great.

Then about ten minutes into his 45-minute presentation, a dialog box appears in the screen behind him, warning that if the laptop weren’t plugged in it would shortly lose power. About a minute later, the screens went black.

So here’s this executive – in a critical leadership moment, a big chance to connect with his dealers and move their relationship forward – and now he has no support. Maybe he remembers what his next slide is and what the bullets are, and maybe he doesn’t. You couldn’t have blamed him if he’d frozen, or suggested they just move on to the Q&A. He’s only human, after all.

But instead, he just shrugged and smiled a “What’re you going to do?” smile and said, “Hey, I didn’t need those slides anyway, let me tell you what I think is most important.”

He talked about what he wanted the dealers to know. What he believed in and what he stood for. He told them how he understood the problems and what steps had already been taken to solve them. He smiled and stayed cool. And when, five minutes later, the organizers found a plug for the laptop and got him up and running again, he just took the pickle and advanced through his slides to the next thing he wanted to talk about. It was one of the greatest moments of grace under fire that I’ve ever seen and he finished his talk with the full respect of everyone in the audience, including the doubters.

How did he do it?

Two things were at play. One, he had profound expertise in his topic. Two, he had what I call “Leadership Presence,” a profound depth of personal strength and confidence that allowed him to be unflappable. He knew what he was talking about and he knew that he knew it. But he also had something a little deeper: a sense of presence that allowed him to rise to the occasion, an ability to shut of the voices of panic and confusion in his mind, to defuse the negative emotions that might hit many of us, a powerful acceptance of reality (you’re on stage with no slides, my friend) and the clarity of mind to know what to say or do next.

Some people will tell you that you have to be born with leadership presence, and certainly some people are. But it can be learned, too. And what I’ve found is that presentation coaching is one of the gateways to developing the skills you need to be a great leader.

Why? It’s more than the fact that being able to deliver your message clearly and compellingly is a critical leadership skill. It’s that the qualities – native or learned – which make a person a great speaker are many of the same qualities that can set them apart from their peers in any environment.

Leadership presence answers the question of what is most important: what you do or who you are. Is it the results you deliver that matters most? Or is it who you are inside?

Take two young management trainees, Hope and Faith, who arrive at a company with similar backgrounds and similar advantages. Through their first 15 to 20 years with the company, each is a super-star, each making her numbers and delivering more than she’s asked for. And by the time they’re into their forties, they’re both regional vice-presidents and among a group of peers who will soon be competing for a spot at a division presidency or a C-suite position.

And that’s where the game really changes. Because while results are still going to count as Hope and Faith move forward – they’ll count as much as ever – everyone at that level is producing results. What everyone doesn’t have is Leadership Presence.

Take Faith, for instance. When it came to the company’s national meeting, she was given an important speaking role. Through the process of message and speech development, she was constantly late with her deliverables – unusual for her – and seemed diffident with those trying to help her. She had to endure sitting in a review meeting with the CEO and explaining that she’d been too busy producing results to get her presentation ready for the review.

When I finally got Faith onstage for her speech coaching, she was fretting about everything from the lighting to the position of the stage. She could barely read the teleprompter that all her peers were using. I took her aside and asked what was wrong. She started blaming the process but I stopped her.

“Look,” I said, “I hear you’re a scratch golfer. You know what, you’re approaching speaking the way I approach golf. I think about my grip, I fret about my stance, I worry about slicing and guess what? My ball always slices. You need to get out of your head and be here in the room. Stop thinking, connect with the audience and have fun.”

It didn’t work. And it turned out that – for all her success and her results over the year – she had reached a level where she just couldn’t summon up the presence – presence of mind, presence of body, presence of emotional maturity – to rise any further, at least not in that organization at that time. Six months later, she was on the street, looking for the next opportunity.

Hope, on the other hand, while she wasn’t a scratch golfer, had a knack for almost always getting other people’s jokes and for laughing at herself when she didn’t. She was taller than most of her male peers and sometimes seemed almost goofy, but she had a laser-like ability to listen and to let you know she got what you were saying. That made her a great communicator. And her presence on stage meant she was a great speaker without even trying. She was who she was, she was modest and forthcoming, and she focused on helping other succeed.

And just last week, the board appointed her to the position of CEO. The names have been changed and they were in different divisions of the organization, but their stories are true. Hope had Leadership Presence and Faith couldn’t get it.

But that doesn’t mean she still can’t, even at this stage of her career. Because presence can be learned and it can be practiced. Anybody can create it for themselves.

What started of for me as preparing executives and leaders to give a speech has grown into something significantly more lasting. Many of the skills that make a great presenter are also skills that make a great leader and I find my coaching, while presentation coaching is still the gateway, has moved to what I call Presence Coaching, asking leaders to look at the mistakes and miscues that take them out of the ebb and flow of a conversation – whether it’s with an audience of one or one thousand – and cause them to lose the attention and respect of the person or persons to whom they’re speaking.

Leadership Presence, on the simplest level, is how you come across to others. And, while it’s not, in itself, about how you dress, how you walk or talk, it can affect those things by creating a heightened sense of what’s appropriate in any moment. It’s not something you can get from Central Casting or from Georgio Armani. Slowing down your rate of speech or speeding up the way you walk won’t make the difference. Because unless you’re present inside yourself, the rest won’t matter.

What does matter is your ability to make yourself the right person at the right time. And that is something you CAN do something about.

If you’d ready to start, send me an e-mail.