Jackson died last night. He wasn’t missing a leg but, at a little less than four months old, he was missing a functioning liver. Of course, we didn’t know this when we brought him home four weeks ago. He was born with a liver shunt, something not uncommon in puppies of certain breeds, though incredibly rare in Standard Poodles. A shunt is simply a blood vessel that bypasses the liver, something all puppies have in utero. Usually, it withers away before birth but if it doesn’t, a relatively simple surgical process can often fix the problem. But in Jackson’s case, what the surgeon found was not repairable.

We knew something was not right after he’d been home a week. We had picked him from among his brothers because he had a very calm demeanor. But when he stopped wanting to play with bouncing balls, we knew that was a little too calm. At first, the vet thought it was a digestive problem and, with a non-functioning liver, it was. But the real problem didn’t come to light until a week later when, shortly after I fed him his breakfast, he started stumbling in circles around the kitchen, leaning against the walls. I raced him to the vet to discover that he had gone temporarily blind due to severe liver distress. And that was when we discovered the shunt.

Some meds and a special diet restored him to full puppyness and after a few days in the hospital, he was home tearing around the yard, pouncing like a lamb in a four-legged leap any time a ball went his way. The surgeon wanted him to stay on the meds and diet for an extra week to build up his strength. But on Saturday night, he went catatonic again and so it was back to the hospital. And from there it was downhill. He would recover his energy, then relapse. The surgery was postponed and then, when he recovered enough, they went in.

I said goodbye to him Monday morning when we took him to the hospital for the last time. I told him that I loved him.I told him it was OK to go. I told him that, one way or another, the sickness would soon be over. When the surgeon called from the operating room to tell us what they found, the choice was to let him go then or to sew him up and revive him so that we could take him to our local vet to be euthanized. That second option would have given us a chance to see him again and say good-bye. But the exercise of getting him well enough to be executed at a later date would have been unfair to him and something our hearts could never bear. So we gave the doc our instructions and hung up the phone. Then we stood together in the kitchen and wept.

In his book, For Love of Animals: Christian Ethics, Consistent Action

,Charles Camosy poses the question of whether animals have souls. I would have to be an enormous fool to say I KNOW the answer to that one but I am on the side of those who believe they do. The affection and connection that can develop between a person and their dog seems to me to be too profound a link to be explained simply in terms of neoteny and oxytocin. One of our previous dogs, Dodger, came to me with a soul connection that I had never felt before in any dog, even dogs who I loved very much. Beyond the fact that he was with me nearly every day of his life, at my side as I worked or when we ran, there was something deeper. I knew that as a working dog he needed to get out and work, so I took him running almost every morning. Five miles a day when we were both younger, then four and then three as we both got older. And he seemed to know that I was a workaholic, so every afternoon at four he would come to my desk and, in his chewy Husky palaver, let me know it was time to play. We took care of each other. We made each other better. And the day we took him to the vet to end his cancer-burdened life was perhaps the hardest pain I’ve ever felt. Not so much because I had to let him go but because I felt I let him down in the way I said goodbye. But how do you gracefully let go a soul mate?

Maybe it is the way a puppy requires your minute-by-minute attention that made Jackson’s 37 days of life with us so intense. On days Jean was out, I changed my work habits and wrote on my laptop in the living room so I could watch him and he could watch me. As long as one of us was present, he would sleep or play quietly. His condition required attention to detail on a higher level. And we never stopped working on his training, operating on the proposition that we should assume he would survive until we were informed otherwise. He was good on a leash and a born retriever, always bringing the ball back and dropping it at my feet. And he was brilliant at “sit,” responding to a hand signal from almost the first moment he saw it. He was a good dog, and we told him so. Right up to the end. 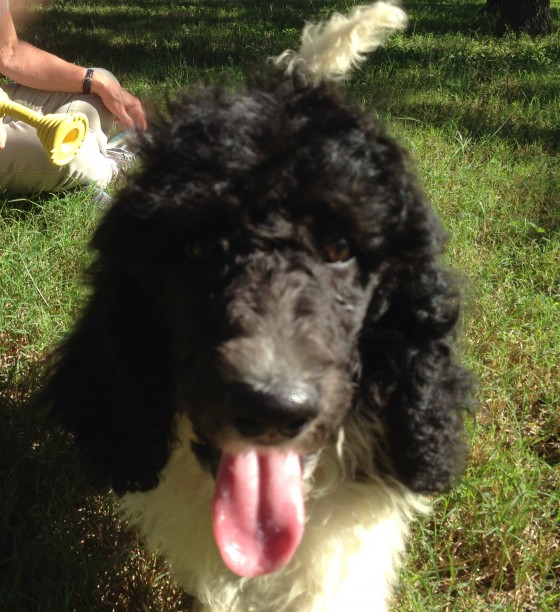 I know there are people who would say, to those of us who grieve so much at the loss of our dogs, that it’s stupid. “It’s just a dog, get over it!” But I think those are people who have never been touched by the soul of a dog. And when one is touched, a dog can tell you things and teach you things. If Jackson was here with us now—and in one very important way I feel he is—he would tell us “Play. If you play you won’t feel sad.”

So let us play.