How To Be A Better Leader In A Shape-Shifting World

A speech to the CEO Communications Summit, Montreal, June 14, 2017 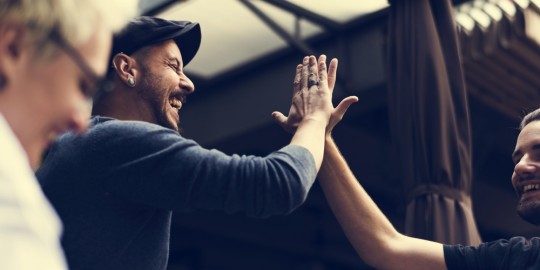 We’re here to talk about the communication of leadership, about the relationship between CEOs and their communicators and what that relationship means in the world we live in. In fact, my first book was a comic novel about that relationship. It’s about a speechwriter who makes a joke a party that his dream job is to be a failed CEO. “That’s where the real money is. How hard could it be? You get on the corporate jet, fly around, make speeches until they fire you and then they give you millions of dollars to go away. I could do that, I’d be great at it!”

In the book, some guys take him up on it, flatter him that he’s such a great leadership coach, he’ll be a great leader. All he has to do is go down with the ship and he gets $25 million. Then he learns that with the stock trades behind this deal, the other guys will go back to Geneva but he’ll go to jail. And also, when it’s done, 11,000 families are going to be poor. So he has to figure out how to rewrite the script and save the day.

CEO and speechwriter are two jobs most people think would be fun to have.

It’s fun to imagine yourself in the big office with the big bucks, barking orders to underlings on your way to fly the company jet to Jackson Hole for the weekend. That’s fun.

It’s also fun to imagine yourself as the really smart person banging out brilliant prose on the keyboard, telling art directors and producers to shut up and let you finish, surrounded by bohemian friends and invited to lots of dinner parties, you know, the writer’s life.

Here’s the thing though. Most people are self-aware enough to know they wouldn’t be good at being a speechwriter. Writing is hard, how to do you think that up? Most people know they couldn’t cut it.

But CEO? Almost everybody thinks they could be a CEO. It’s almost an American cult belief, the idea that anyone who is enough of a genius to invent an app to name cats would obviously be a genius at running a company with 30,000 employees.

It’s kind of insane. But that’s how Americans think.

And the danger is we get really bad leadership sometimes because somebody doesn’t know who he really is, he just thinks he wants the bucks. In my experience, and I’ve worked with several people who made it to that level of incompetence, there’s nothing you can do as a coach to help them except to help them move out.

A CEO usually can’t do that by herself. The smart ones want to know who around them can be their scout. Who can see all the way to the horizon and help them focus on what really matters.

And what really matters? The communication of leadership. Framing the story of what your organization stands for at this moment in time.

This relationship between the CEO and speechwriter – our culture doesn’t exactly give us a lot to go on about what this is.

Yesterday, Scott went back to the Greeks and Romans. So let me go to Shakespeare.

My advice is, you don’t want to be Iago. What he communicated was confusion, followed by destruction.

Falstaff, maybe, if you drink a lot with your client.

Hamlet had Horatio, who basically didn’t bring much to the party.

King Lear has Kent, who’s honest and good, does what he’s told … but he’s more like a COO. He keeps going offstage to try and fix the problems Lear creates.

As speechwriters and speech coaches, that’s us. We’re the Court Jesters, the ones who can speak truth to power without getting fired (at least not too often). And far from being rude or improper, that’s the minimum we owe somebody who’s going to get up on stage in front of a thousand people and will die unless we help them get it right. It’s an awesome responsibility.

I guess, if there’s one modern work of art that reflects who we are and what we do, it has to be The King’s Speech, the only time I’ve ever seen the way I spend my days accurately reflected on the screen. That, and Groundhog Day.

Japanese literature does have some great models of people who coached leaders.

Most famous is probably, Takuan, the laughing monk in the story of Japan’s greatest swordsman, Musashi. He’s a character in more than a hundred books, movies and anime. He’s like Yoda to the swordsman. Always making him stop and clear his mind.

But here’s the thing: Takuan Soho was a real Zen Master who, at the same time Shakespeare was alive, was going around Japan coaching Samurai leaders on how to lead, on the concept of “right mind, right action.”

He wrote to one warlord and asked him to consider two questions.

You don’t have to be a Zen master to hear how that resonates with what we face today.

Has there ever been a more interesting and important time to be a corporate speechwriter?

My father was a CEO back in the 70s. He’s 92 now, lives in DC and doesn’t take a single pill. So before I came, I called him and said, Hey Dad, tell me about your speeches, how did you get your speeches done? He said he wrote his own — mostly just bullet points on a card. Didn’t use a speechwriter. So, what were the speeches about? He said, mainly, what are we going to do about third quarter inventories of aluminum billets and stuff like that. Deadly boring. He said it would have been a lot more fun doing what I do.

What’s different in this moment of history is this: CEO’s can’t just live in the “business world” anymore, like my Dad could. They have to live in the real world. They have to be responsible for their footprint in the real world. The first part of that is understanding that you do have a footprint, a footprint that extends far beyond your balance sheet. It’s economic, it’s societal, it’s historic.

I co-authored a book called Nanovation that was a 3-year case study on Tata Motors and the Nano, their attempt to get Indian families off scooters and into safe cars. The Tata Group is an interesting company. A hundred and fifty years ago, they decided it wasn’t good enough to make a profit. They saw that if India was ever going to be independent, somebody needed to build an industrial infrastructure and the British weren’t going to do that. So the Tatas made it their purpose to build that infrastructure. And build it profitably.

They made themselves into industrial Gandhis. And the payoffs for that purpose have been huge.

If you work for a company like that, that’s interesting. Communicating that purpose is important. Not just to customers, but to the world at large. You take a stand.

The communication of leadership is the most important thing you can work on in a company, because everything else depends on getting that right.

This is critical, because we are at a “leadership inflection point” that’s caused by our increased consciousness of global cause and effect.

Let me illustrate that with Pete Weissman’s Three Pillars 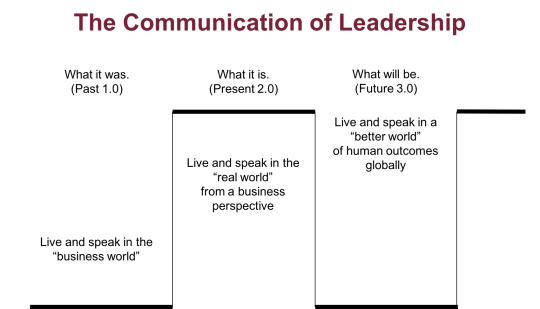 When my Dad was a CEO, business leaders lived and spoke about “the business world.”

Today’s CEO lives and speaks in “the real world” from a business perspective. Because we have a better understanding of how business is connected to human outcomes. Today, too much is at stake and we see it. We can’t ignore “cause and effect.”

Leaders will live and speak in “a better world” of human outcomes globally. Because the costs are too visible to ignore.

We live in an age when we have had real consensus on the idea of purpose-based leadership, at least in the best companies.

An age when ideas of servant leadership, emotional maturity and diversity mean something, where they aren’t laughed at. That’s “authentic leadership.”

That consensus is being challenged by public leadership that scoffs at things like rules and facts. That’s “alternative leadership.”

Authentic leadership talks about “what’s so.”

We’ve seen this before in history. It never ends well.

We’ll see which kind of leaderships wins in the long run, but right now the business leaders we work with have to be able to talk about a lot more than third quarter inventories of aluminum billet. They have to talk about their organization’s place in the world. And they need you to be able to frame the story of your organization as a positive force for good, as a force to be trusted. A force to be respected.

If you have Muslim employees or customers or do business in Muslim populations, you can’t clam up about a Muslim ban. Maybe the US can pull out of the Paris Accords but GE can’t. GM can’t. Sherwin-Williams can’t. Because they do business in the real world.

We live in interesting times. This moment in history requires a special type of speechwriter. I think we have a roomful of that type today. Our job – our calling – is to help the best leaders frame the story of what great leadership means and what it stands for. Because we need leadership from our global corporate leaders now more than ever.