Fascinating long article yesterday by Jimmy Guterman about tech CEO Stephen Wolfram. If you’re not familiar, Wolfram is the creator of Mathematica, the leading computational software for math and science fields, along with the Wolfram|Alpha computational knowledge engine. He’s also the author the 1192 page A New Kind of Science, in which he modestly proposed to do for our knowledge of everything what Isaac Newton did for mathematics.

In other words, change everything. 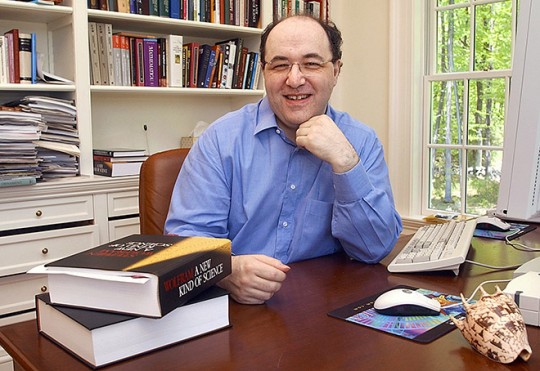 Wolfram is a genius, along the lines of Steve Jobs. (When he asked his friend Jobs for a blurb for his book, Jobs laughed at him, saying “Newton didn’t have back cover quotes. Why do you want them?”) In his book, he lays out the theory that rather than using mathematics to understand the most basic principles of physics, we should think of the world–of our entire reality from physics to human evolution and psychology–as being built on simple computer programs. But he’s not just a science geek, he’s also an iconoclastic and very successful business leader.

“Indeed, the practices Wolfram the man uses to lead Wolfram the company are anything but conventional. He’s best known for his technical discoveries, but his most ingenious invention may turn out to be a successful company that he built around his own idiosyncrasies: his decisions about where to work, when to work, how to work—in a nutshell, his insistence on building a corporate culture that behaves a lot like he does.

While he gives the company an A+ on science and innovation, he gives them only a B or C on business. He knows they could have made more money had they focused on maximizing profits or gone public. It’s just that making money, while important to him, isn’t as important as changing the world.

What Wolfram has done, though, is build a company focused on identifying big problems and going at them without restraint. “It’s been a very positive thing here, being able to motivate people to work on what seemed like impossible projects. In many situations, you get in some meeting and somebody will say, ‘There’s 30 years’ worth of literature about this and it’s still an unsolved problem.’ At that point, the group might say, ‘Forget it, that’s just hopeless.’ At least we’ve managed to develop a culture where people say, ‘Great, let’s try and solve this.’ The thing that’s really interesting is how often one can.”

Read the article in Strategy+Business here.