On the Creation of Wealth and Building a Better World

(Continuing live-blogging my next book in progress, Branded to the Bone.) 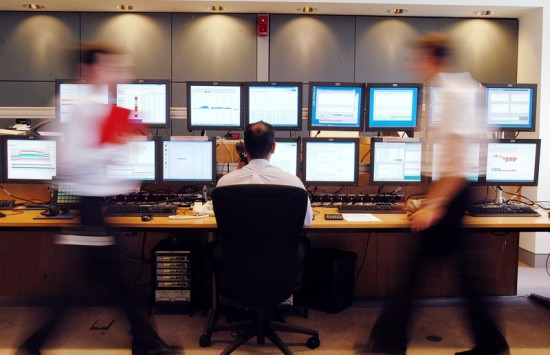 Imagine a business that has no purpose other than the “manufacture” of money. Such businesses do exist. Certain hedge funds employ small armies of Ph.D.s who use principles of quantitative analysis to predict minute market movements. They nurse esoteric algorithms that calculate spreads on stock movements and jump in and out of equity or option positions as stock prices fluctuate. They turn what is a theoretical asset—a minute and temporary fluctuation in the “paper” price of an asset—into real money. By running mathematical bets on millions of microscopic stock movements, the hedge fund makes a couple of million dollars on a good day; real money that, at the end of the day, is sitting in their bank account. They can lose, of course, and they have lost big from time to time. But these are smart people who tend to win more than they lose.

You can imagine that, if you were good at that sort of thing, it would be fun to be in that business. It would be a little like being paid to play a fascinating game. It would be thrilling when your bets were winning, terrifying when your positions were upside down and perhaps somewhat technical and dry most of the rest of the time. And as you accumulated billions of assets in your accounts around the world, what a warm and pleasant feeling that would be.

Such a business has no customers, just investors. Sure, some investors might want to convince you that they should be treated like customers, but they’ve brought you their money purely as earlier investors might have taken their money to the East India Company to invest in a load of spices coming from Asia. And there’s nothing wrong with a business that does that, assuming they’re not doing things which would cause the world banking system to collapse. Creating money out of thin air and then putting it in banks or investing it in the market would certainly seem to have a positive effect on the world’s economy.

Now imagine a business at the opposite end of the spectrum, a business that is entirely focused on the purpose of social welfare and has zero interest in profit. One example would be Grameen Bank, which its founder, Nobel Laureate Muhammad Yunus, describes as “social business.”

“Capitalism has been interpreted as an exclusively profit-centric human engagement,” Yunus told David Bornstein of the New York Times as he explained the concept of social business. “Some have been saying to bring people and planet into the picture. This can be a good change, but it is still not fully operationalized. Are you putting people, planet and profit at the same level?

“What I have been trying to promote is different. I dismiss personal profit, and focus exclusively on people and planet. That’s what I call social business: a non-dividend company dedicated to solving human problems. You can go all the way, forgetting about personal profit, being single-minded about solving problems. The company makes profit, but profit stays with the company. The owner will only get back the original investment. Nothing more.

“I’m not saying to get away from profit-making businesses. I’m saying keep these separate, run them in parallel. There is a toolbox to solve the problems of poverty, unemployment, the environment. All I’m doing is adding one more tool to the box. It’s simply enhancing the capability of people to express themselves in another way to address the problems we have.” 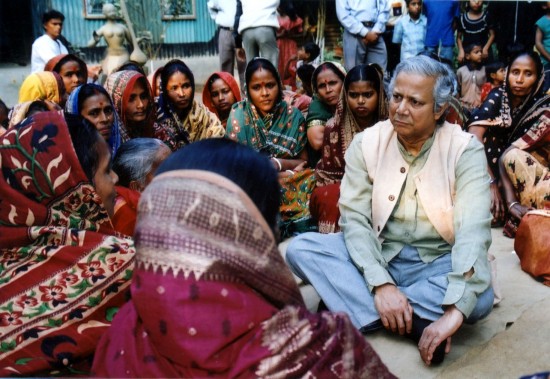 In a social business, such as Grameen Bank or other Grameen business, like GrameenPhone in Bangladesh or health services in Ghana, the only purpose of the business is to raise people out of poverty. Just like the hedge fund, it does this with microscopic investments that amount to huge numbers over time. And, like the hedge fund, the customers are also the investors. When a woman in a village in Asia uses Grameen funding to start a small business, she repays the principal and interest and also becomes a member in the bank. She saves a little money and keeps it in the bank and the bank uses those funds to help others start businesses (don’t worry, Grameen loans have a 98% repayment rate, much better than U.S. bank loans). The benefits of social business are incremental: unlike the hedge fund, no one is going to get rich borrowing five dollars with which to buy a chicken and selling the eggs and chicks. But over time, the benefits to society can be extensive.

There are 8.5 million borrowers in Grameen Bank and that means that, at an average of five members per family, 40 million people have benefitted from the bank’s microfinance operations. Two of the key benefits have been increased access to education and health care for the borrowers’ children. And now those children are a second generation of borrowers: better educated than their parents and able build bigger and better businesses in Bangladesh, along with bigger and better social support programs.

The profit orientation is only one orientation of a person. The same people who are interested in profit making are also selfless. I am not saying that capitalist theory is wrong. I am saying that it has not been interpreted and practiced fully. The selfless part of human beings has not been allowed to play out. As a result, we created a concept of business based on money-centric, one-dimensional human beings. But real human beings are multidimensional.

As Yunus points out, the profit motive is only one orientation of a person. A leader of a company that focuses solely on generating billions of dollars from stock trading methods that require a Ph.D. to understand will almost certainly look for ways do something good with his or her share of those profits. They’ll build hospitals or endow universities. They’ll seek to add value to the world but they’ll have to do it outside the business, since there’s no way to do it inside the business framework they’ve created. Similarly, the person who creates a social business can’t live on warm and fuzzy feelings alone. He or she will need to feed and shelter a family. And, unless they’re independently wealthy, they’ll need to either find a way for the business to pay them something for their time or they’ll need to get a second job.

But what if there was a middle way? And what of that middle way could not only generate massive global profits but could also help people rise out of poverty? What if it’s not an either or proposition? What if, instead of saying that companies can “do well by doing good,” it turned out that some companies can actually do better by doing good?

If you know a company that’s Branded to the Bone, leave a comment and let me know about them.