Interesting article this week by Frank Jacobs, in the New York Times, about and area of Asia called Zomia. This is a vast “nationless” block of land stretching from Afghanistan in the west, through China and Nepal, all the way down to the highlands of Vietnam and Laos. While it fits within borders of different countries, what happens in Zomia stays in Zomia. It’s no so much that the governments have been unable to control these areas but that the various tribal groups have opted to reject and withdraw from modernity. They’ve stayed in their villages and valleys because, like Garbo, they want to be left alone.

Money quote from Jacobs: “These highlanders … are not unassimilated because they are untouched by modernity, but because they reject it. This puts them in league with, or at least in the same league as, the non-conformists of Alsatia (an area of London that was a legal ‘safe haven’ unitl 1723). This also illuminates, and complicates, our understanding of the Afghanistan-Pakistan conflicts, which might not be all about secular modernity versus religious orthodoxy, but maybe also about city versus village (or, more likely, valley).”

This is an area in which much of the world’s heroin is produced, but as Jacobs notes, the historical record of places like this suggests that as modernity and communication expand, they will lose their independence and assimilate into the larger society. 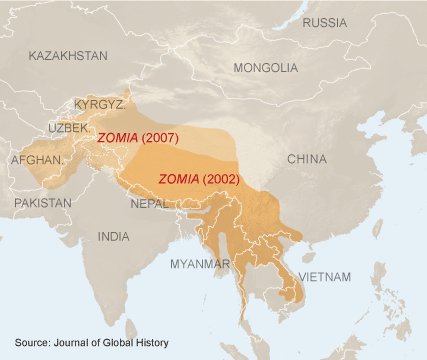