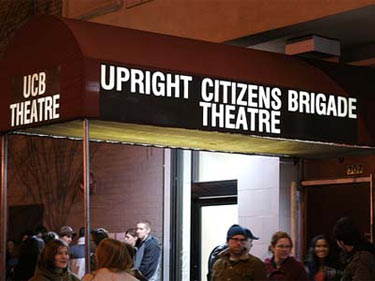 Improv comedy isn’t about great writing or carefully crafted characters. It’s about being fully present, in the moment and fearless. It’s about being ready for anything. About being accepting. About staying loose. And being so open to the possibilities that, when they present themselves, you see them and run with them when others would have missed them completely.

It’s just like leadership. Just like any creative venture when you really get into it. And every leader should spend time developing an understanding of how it works. You can start with this short piece by improv comic Will Hines.

There’s the content of the advice — the practical usefulness of it — and then there’s also the wording and tone which that advice is given in. And I think the genius of Del Close and other great improv teachers is that they know how to give genuinely good advice in such a way that it connects with actors and writers in a deep, personal way.

When Del said “say yes” — that could be seen as just practical advice for building scenes together. Del could have just said “cooperate” but that term wouldn’t have the magic, alluring hint of something MORE that “say yes” does. When we hear “say yes” we hear something much deeper. We instinctually know that we’re being asked to be fundamentally open-minded, to be brave, to be adventurous.

The most popular improv advice sounds like spiritual challenges. “Follow the fear” — without even considering if that’s actually practical advice for an improvised comedy scene, you want to believe that. You’ve been hungry to have someone tell you to follow the fear. You find a way to make that advice true.

The ability to listen intently to what your colleagues and clients are saying; the ability to synthesize apparently combative points of view in to an obvious solution; the clarity to hear not what’s being said but what’s trying to happen in the conversation: these are traits of a great leader. It’s selfless, not self-aggrandizing. It’s about the bigger argument, the argument for, the way ahead.

If you look at the following clip, you have to understand that none of these guys come on the stage with an agenda. They don’t have a joke they’re determined to slip in. They’re not trying to be the big dog. They’re playing with what happens and directing it to a funny end.

Imagine using this method in every conversation you have. You’re intensely interested in everything others are saying. You’re focused on finding an opportunity to expand. And you’re focused on helping the other person find the payoff. How would that change the culture of your organization? Profoundly, is my guess.

I was coaching a top executive recently who had a not-very-endearing habit of making incredibly lame jokes — because he thought it made him likeable. I explained how being the class clown works: it’s not about making fun of what the teacher is saying. It’s about being so engaged in the conversation of what he’s saying that when there’s an opportunity to say something truly funny, even the teacher laughs. He laughs because the joke is inside the conversation, not outside.