Jogging Your Memory: Can Exercise Make You Smarter? 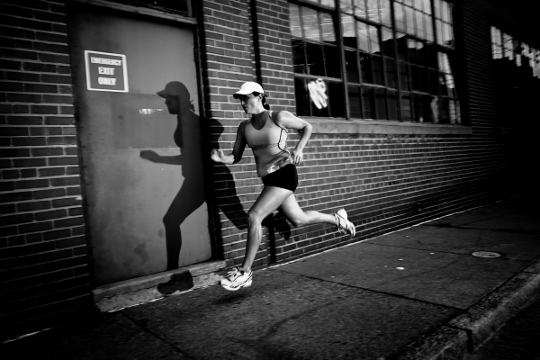 Gretchen Reynolds in The New York Times offers a compelling look at the science behind the theory that exercise makes us smarter and finds that it’s not only true today but may be part of what caused human intelligence to develop in the first place. She quotes a 2004 article by the evolutionary biologists Daniel Lieberman of Harvard and Dennis Bramble of the University of Utah in which they suggested early humans developed as endurance athletes who could simply jog behind their prey until the animal, less suited for endurance, simply dropped in its tracks.

“But simultaneously, in a development that until recently many scientists viewed as unrelated, humans were becoming smarter. Their brains were increasing rapidly in size.

“Today, humans have a brain that is about three times larger than would be expected, anthropologists say, given our species’ body size in comparison with that of other mammals.”

How do we explain these brains? Or, put another way, how come we have the ability to explain brains in the first place? Scientists working to understand this have discovered that if you breed lab rats to become endurance runners, after a few generations their bodies begin to produce high levels of substances linked to tissue growth and health. One of these is BDNF, or brain-derived neurotronic factor, which is not only important for physical endurance, but also causes the brain to grow. In short, all that endurance running may have made early humans smarter.

She quotes David Raichlen from the University of Arizona, who recently published a paper on the topic.

“’We think that what happened’ in our early hunter-gatherer ancestors, he says, is that the more athletic and active survived and, as with the lab mice, passed along physiological characteristics that improved their endurance, including elevated levels of BDNF. Eventually, these early athletes had enough BDNF coursing through their bodies that some could migrate from the muscles to the brain, where it nudged the growth of brain tissue.

“Those particular early humans then applied their growing ability to think and reason toward better tracking prey, becoming the best-fed and most successful from an evolutionary standpoint. Being in motion made them smarter, and being smarter now allowed them to move more efficiently.

“And out of all of this came, eventually, an ability to understand higher math and invent iPads. But that was some time later.”

If you needed a reason to support your resolution to exercise more in the coming year, here it is: regular aerobic exercise strengthens your brain and makes you a better thinker.