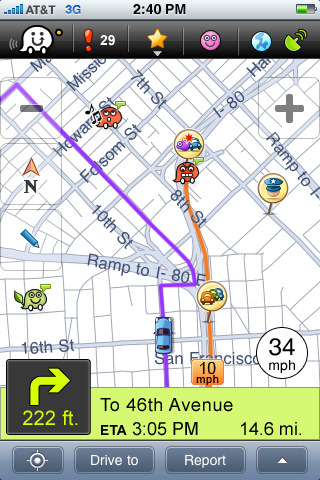 Last night I tested a new iPhone app: a navigation system called WAZE. The nav system in my car is six years old, clunky and outdated. The Garmin units I buy ($300 bucks every couple of years) are really good, although I’ve had some quality issues with them. And it seemed like it would be great to use the iPhone since I always have it with me. But while the current Map app on the iPhone gives good directions, it doesn’t give them in my ear and it’s pretty dopey (and unsafe) to try to read it while driving. Plus, while it shows traffic, it doesn’t route you around it.

WAZE worked very well. I set my home location, they typed in the address of a friend who was going to help me upload my latest keynote speech to YouTube. I put the earphones on, put on some music, cranked open the sunroof and motored out in a beautiful sunny afternoon. The directions were great, accurate and easy to follow. The voice sounded natural and gave me warnings half a mile, quarter of a mile and just before each turn. She named the roads and pronounced them correctly. She showed me a back way into my friend’s street that I never knew about and, when I ignored her, she quietly rerouted to the direction I usually took. The voice muted the music just enough to be heard but wasn’t jarring.

One very cool feature is that this is a social app — I could see other drivers all over the Austin area as they reported on traffic conditions: a cop in a speed trap, a slow down, bad traffic — even the driver’s move. You can even ping other drivers, which sounds like an idiotic idea to me but I accept that there are some very lonely people out there.

One thing I wish it could do is use my address book or the Google map to find an address. For instance, if I wanted directions to a hotel, it would be nice to be able to find the hotel on the map and then access WAZE to take me there. As it is, I would have to read the address and then manually enter it.

There’s a voice command mode which can be activated by a hand wave in front of the screen — first time I’ve seen that. It seemed to work well but, since I keep my phone in a niche in the console, every time I shifted it activated. So I turned it off. I’ll get a cradle to attach it to the dash and then that might be a good way to go. The voice commands let you post notes on road conditions without having to fiddle with the phone, so that’s nice. And then the system can route you around traffic or accidents.

One great feature is the price: it’s free. I just paid $300 a couple of weeks ago for a Garmin unit on which the voice seems not to work at all. I think I’ll take it back and stick with this.