Southwest Airlines, about which my co-authors Kevin and Jackie wrote so brilliantly, gets all the great customer service stories and American gets far fewer, so when there’s a great story, it’s a pleasure to share it. 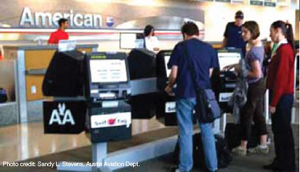 Returning from a trip on American last week, I was just pulling out of the parking lot in Austin when my phone rang. “Mr. Dunston, this is Barb with American. Did you leave an object on the plane?”

A sudden realization: “My iPad!”

I circled the airport once and then pulled up in front of the American doors. My phone rang, I told her where I was and a moment later, here comes Barb with my iPad. She said she liked my car and that her husband had one just like it.

So cudos to Barb and to American for that kind of concern for a customer. Other places they might have sent me an e-mail with a number to call a day later. But she treated a customer they way she would have wanted to be treated and it showed. Thanks, Barb.