Apple and the Tyranny of Mediocre Ideas 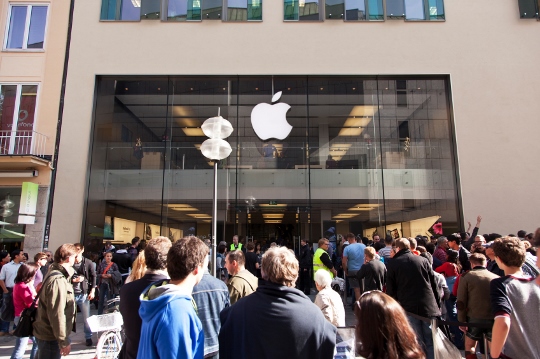 “The fundamental problem with most businesses is that they’re governed by mediocre ideas,” said Bill O’Brien, the former CEO of Hanover Insurance, quoted in the astonishing book, Presence: Human Purpose and the Field of the Future by Senge, Scharmer, Jaworski and Flowers. O’Brien offers, as an example of a mediocre idea, the maximizing of return on invested capital. “Mediocre ideas don’t uplift people. They don’t give them something they can tell their children about. They don’t create much meaning.”

Another, more topical example of a mediocre idea is Apple’s announcement that it plans to shore up its falling share price through stock buybacks and a higher dividend. As announcements from Apple go, it surely ranks as one of the least inspired in the company’s history. Here’s why.

Let’s start with an imagined rant from The Artist Formerly Known As Steve: “Are you INSANE? Today’s stock price is IRRELEVANT! It can only reflect one of two things: the chronic insanity of the marketplace or the underlying value of the company. And since the insanity of the marketplace is uncontrollable, trying to control it is what? It’s insane. So the only sane thing to do is to focus on what? Focus on the underlying value of the company. And how do we do that? By continuing the flow of disruptive innovation, coupled with disruptive execution, that our customers expect. Anything else is a waste of our focus.”

It’s not that stock buy-backs are a bad idea: they’re just a mediocre idea. And mediocre ideas are not what we have come to expect from Apple. Put another way, what does it tell us that the leadership of Apple believes that the highest and best use of $100 billion is to placate jittery investors? What if they had decided to let investors stay jittery and invest the $100 billion in making the company stronger and its competitors weaker? In making a great company greater for the long run?

It’s not like Apple has suddenly become a bad company or a bad investment. All that has happened is that Apple’s gross margins have declined for the last four quarters, the first time that’s happened since 1993. Does that make them unprofitable? No, it just makes them fractionally less profitable than they were last year.

Every leader has to deal with the tyranny of mediocre ideas. One of the hallmarks of a great company is their ability to get away with breaking the chains of that tyranny. The idea that a company must return revenue and profit growth quarter after quarter forever is unsustainable. Everyone knows that. One proof of that unsustainability is that the only things in the natural world that expand unceasingly are kudzu, bedbug populations and algae blooms; and those only expand when the overall ecology is out of balance.

If Apple is really worth the $700 per share at which it was trading last year, then the market is insane. If Apple is worth the $400 per share that it’s trading at currently, then Apple is insane if it focuses on stock manipulation. With its price-to-earnings ratio currently at around 9.6; with its still-enviable gross margins around 37%; with gross revenue from sales continuing to rise; with new products in the pipeline and the most respected brand and products in the tech industry, if not the entire universe of business, Apple’s stock price is probably a good buy right now (disclaimer: I own ten shares). If Apple is using this moment of market insanity to buy its own shares below market value, that’s a nice idea. But that doesn’t require a press conference.

There’s a bit of wisdom from the Arabian desert that says, “When the caravan passes, the dogs bark.” It looks a bit silly when the caravan masters climb off their camels and run around trying to shush the dogs. Tim Cook and the Apple leadership have only one important thing to do—only one thing they’ll want to tell their children about—and that’s to continue the flow of products and services for which they’ve become so famous. It may be that after seven years of mind-blowing growth and market disruption with iPhones and iPads, they’re entering a fallow period where their business matures and their returns are simply great, instead of insanely great. If so, management’s focus needs to be on the next wave of innovation. Not on the barking of the dogs.