Innovation is hard. Innovation means change. We have to build a culture that embraces change, a culture that is literally hungry for it. Because when you have a workforce that resists change, you know what you get?

You get the Titanic. 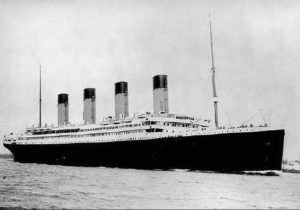 The Titanic was one of the most innovative products of its time and we all know how far that got them … because they didn’t have the culture to understand how to make use of the innovation. In fact, the crew of the Titanic IGNORED the innovations. They refused to use them. They left the doors of the watertight bulkheads open so that when the ship hit the iceberg, the water rushed through them. The guys at the home office of White Star Lines? Real innovative guys. But they didn’t know how to build a culture of innovation.

Did you know the Titanic had two sister ships? She did, the Britannic and the Olympic.

And after the Titanic sank they went, hey, we gotta learn a lesson from this. So they made sure they had enough lifeboats for everyone. And sure enough, four years after the Titanic went down, Britannic struck a mine and sank. This time, they had enough life boats to get everyone off, so that’s good. But, just like the Titanic, they still hadn’t closed up the doors in the watertight bulkheads, so the great innovation that was supposed to keep her from sinking still didn’t work.

That is SERIOUSLY resistant to change.

But with Olympic, they learned. Olympic went on to hit both a German submarine and the Nantucket lightship. But because they learned the lesson of the watertight bulkheads, she didn’t sink and was able to get back to port both times.

But you know what? They still missed the most important lesson of all … DON’T HIT STUFF!!!

Great cultures institutionalize what they learn so they don’t have to KEEP learning hard lessons over and over. It’s like steaming against the tide, you have to keep the momentum so you don’t slide back onto the rocks.