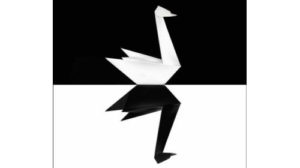 This column by Peter Daniel Haworth caught my eye and reminded me of the Theory of the Black Swan, the rara avis (that means rare bird) of events, the unthinkable thing that can never happen. At least, that’s what it meant in 16th London, where it was believed that all swans always were and always would be white, based on the sound empirical evidence that no one had ever seen one in another color, at least not until the British landed in Australia.

Today the meaning is changing and we’re heading to the moment when a black swan will refer to the outlier event that can never happen but probably soon will anyway. Here’s what Haworth said in his excellent and horrifying column (don’t read it, it’s really too scary).

The concept and the above three-characteristic definition of “black swan” events were recently made famous by Nassim Nicholas Taleb (investment theorist and author) in his book, The Black Swan. Taleb discusses how many events in history actually qualify as black swans, and the list includes the world wars, the rise of Islamic fundamentalism, the spread of the internet, etc. According to Taleb, the irony is that most important changes in the world are actually black swans, but, yet, there is so little focus on them qua black swans in the social sciences. This is, in part, due to the conventional methodology of focusing on statistically probable phenomena, rather than the possibility of outliers. Taleb, moreover, goes beyond mere theory. He also describes how investors have and can employ black-swan analysis in their work; anticipating and preparing for the improbable can bestow significant rewards. Thus, his insights about outliers have practical implications for how people prepare for the future.

People talk a lot today about the increased pace of change, but change has almost always been fast, in the sense that we tend not to see it coming. I’m in Santa Fe for the month and in talking to a friend at the Santa Clara Pueblo, heard the story of the arrival of the Conquistadors in the Espanola Valley in 1598. People came running up from the river saying, “There’s new people in the valley, they have funny clothes, come look.” And within a couple of years, 95% of the population was dead, not from warfare but from infectious diseases. They could never have seen that coming.

No one could see an earthquake triggering a tsunami that knocked the power and cooling off at six nuclear reactors, but it happened. No one really saw the iPhone or the iPad coming, either. Even after the iPad was announced, a lot of people didn’t understand how it would change their lives. Until it did.

When the Nano was announced in 2003, competitors laughed at the idea of a great little car people would love to drive that cost about the same as a scooter. Suzuki, in particular, who had a near monopoly on the low end of the market with a super cheap car called the Maruti, laughed the loudest. And then their black swan moment came and they had no defense against it. They discontinued the Maruti, gave up their enormous, first-mover market share and walked away.

Black swans aren’t always negative, not by a long shot. Reading glasses were first manufactured in Italy in 1286 and within 20 years spread across the continent. I’ll make the bad pun that no one saw them coming but the fact is, for all our ingenuity and imagination, we have a tough time imagining something that hasn’t been imagined before.

Like a competitor suddenly launching a better product than yours at half the price.

What’s your black swan? What’s the impossible thing that could never happen to your company? You better identify it, because you know what? It’s likely to happen to you and sooner than you think.

(The reason Haworth’s article is so scary is that he asks what would happen if the unthinkable “black swan” happened and the United States political system really came apart at the seams. Don’t read it.)