I’m seeing lots of articles with tips on how to “black-swan” proof your portfolio, to which I say, “Good luck.” To quote the leadership gurus at Monty Python, “No one expects the Spanish Inquisition.” 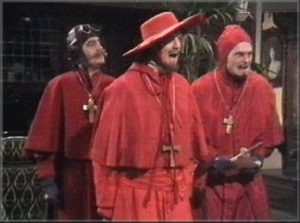 However, if you’re going to look to anyone for advice on how to avoid black swans, I suppose you should look to Nassim Nicholas Taleb who coined the phrase. He offers some interesting advice in this older, 2009 article in Financial Times. His points are clever and thought-provoking, focused mostly on the economic collapse of 2008-2009 and our attempts to recover from that event.

Three favorites:
What is fragile should should break early while it is still small. (Or, as Kevin, Jackie and I like to say, “Risk more, fail faster and bounce back stronger.”) Don’t let anything get too big to fail. Kill it before it eats Cleveland.
People who were driving a school bus blindfolded (and crashed it) should never be given a new bus. If the baby sitter let your kids get drunk last weekend, why are you having her back this weekend? Same thing with Wall Street. Why are the same people running the store?
Do not give children sticks of dynamite, even if they come with a warning. Three years on, have we really made our financial markets safer? I’m not so sure that those who made personal fortunes betting on the ponies that galloped us into the burning stable are doing anything different than they did before or, in fact, think they did anything wrong. So good luck to the rest of us who depend on bankers to be sober as judges.

When I was taught to drive (by the legendary “Crash” McClain), I was taught to watch out of the other driver and to assume they were all going to do crazy things; to watch what was a coming a long, long way down the road; and to always have an escape route planned. The same goes in our world today: if you see a black swan coming at you, try not to hit it head on. Just be prepared to drive around it and keep going.