On a rainy day in Bangalore during the monsoons of 2002, Ratan Tata, Chairman of the Tata Group, witnessed something that’s not that unusual in India: an entire family of four riding on a motor scooter.

He told his driver to be careful, that in that weather the family could lose control.
“Please drive carefully,” he tells the driver. “The roads will be slippery.” The driver nods as he pulls away from the curb. A few minutes later, as Mr. Tata’s car approaches an intersection, a family on the scooter passes them.

And then it happened. “I had no sooner said the words when he lost control and went slipping down on the pavement, the scooter sliding one way and the family members tumbling in all directions,” Ratan Tata told us. “If we had been going faster there would have been no way to keep from running over them. The family was all over the road and could have been under the car. I thought, ‘this is really bad.’ And I thought, now add nighttime to this. Add a little speed. Add a little bit of lack of control and you have a really dangerous mode of transport.”

Someone had to ask “What if?”

“Actions speak louder than words, but not nearly as often.”

A Dream Born of Compassion

Most people would leave the scene of the accident feeling sad and sorry, but few would be in a position to take meaningful action. As Chairman of the Tata Group, which owns and manages Tata Motors, he had a car company at his command. He had the means and opportunity to act and now, his heart pumping from the excitement, he had a motive.

Immediately, his mind went to work. He couldn’t shut the idea down; it played out over and over in his head.

“What if we could give these people something safer that they could afford?” he asked himself. “What if we made a four-wheel scooter that was more stable? That could be enclosed? That could offer protection from both the rain and from accidents?”

On that rainy afternoon, Ratan Tata conceived a big dream in the service of a noble cause: he would find a way to put safe transportation within the reach of India’s emerging millions. But while Nano was conceived in that moment, it was a long way from taking shape. In fact, it would take nearly seven years before the keys to the first Nano were handed over to the first thrilled customer.

“I think that’s when the whole thing started in my mind, looking at what is now a pretty familiar sight in India, an entire family travelling on a scooter with three or four family members.” 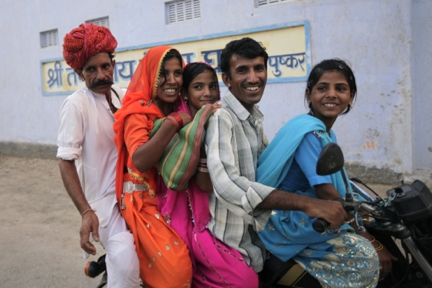 They’re educated, working people with a family and dreams of giving their children a better life. They’re making do with what they can afford. And they’re doing better than any generation of Indians before them.

Until they can afford cars—and lacking public transportation options that meet their needs—they don’t have much choice but to get on board and hope all goes well.
What if someone created a car they could afford? With the Nano, someone finally did.

Get the whole story on Nanovation here