Nanovation takes, as a fundamental commitment, that it will deliver no apology products.

When the first few customers took delivery of their Nanos in 2009, they proudly basked in the media attention. No one thought they should be embarrassed for buying such an inexpensive car. Everyone thought they were celebrities.

Even though it’s the least expensive car in the world, it makes you proud.

Why do companies filled with brilliant people fail to produce brilliant products? First, when the focus is on price, not quality, you get shoddy goods by default. Second, if the focus is on profiting from a need instead of fulfilling it fully, you’ll have no love from customer.

So why is Tata different? Pick a word: leadership, values, focus, purpose. Or try this word: balance. The Tata culture has always had a fundamentally different relationship with results, where success is measured in a balance of financial good and public good, where the benefits to customers and employees are considered to be as important as the benefits to shareholders.

That means a very clear understanding that an apology product would be bad for customers, for employees and for shareholders. Customers, trusting the Tata brand, might be fooled once, maybe even twice, but would be unlikely to return for that punishment again. Employees, ashamed of having their name on pathetically embarrassing products, would stop telling neighbors where they work. Shareholders, watching their returns diminish, would either take their investment elsewhere or send management packing.

Dignity starts inside and that’s where Team Nano started, too. This early design study focused on interior space, with a priority to leg- and head-room. The team knew that if people put five or even six family members on a scooter, they’d try to put that many in the Nano. They also knew some of those rear seat passengers might be grandparents or ladies in saris, so four doors were needed for comfortable, dignified access. 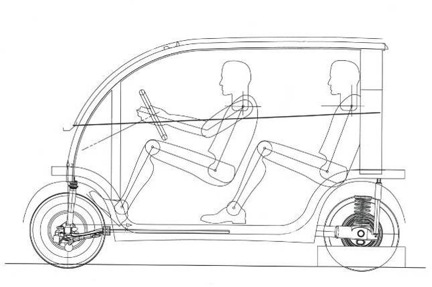 This early rendering helped the team develop the interior dimensions, around which everything else was designed. Members of the team smile ruefully when they tell us how much less expensive they could have made the Nano with just two doors, but the dignity of passengers drove the decision. In a very real sense, the Nano was designed around the passengers.

When companies are passionate about what really matters to their customers, even the idea of an apology product becomes unacceptable. When you’re focused on making other people successful—getting them safe and dignified transportation so they can join the march to the middle class—you don’t want to hear anyone on the team suggest you cut a corner either on price or quality. For Team Nano, failure was not an option. They would produce not just an inexpensive car but a great inexpensive car, with nothing they’d have to apologize for.