One way you can identify a Nanovation is that it’s not just revolutionary, it’s revolutionarily elegant.

Elegance is defined as ingenious simplicity and effectiveness in the solution of a problem. We can’t think of a better description of the Nano than that. In fact, when we asked people at the Nano launch in Mumbai what they first thought when they saw it in person, that’s pretty much what they said. Unusually effective and simple. And the deeper you dive into the ways in which the Nano team solved the problem of how to make a car for the price of a scooter, the more this description holds true.

We see the process of elegant design has having five qualities. Five touchstones that are part of any really great design solution. Five elements that are certainly exemplified in the process of Team Nano and in the results of their work. 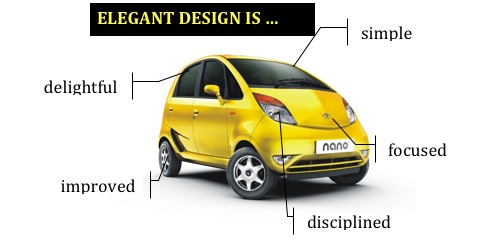 How did Tata make a car for the price of a motor scooter? They did it by simplifying everything. Everything. Every single piece of material used on the car, every part and every process. Every item had to justify its cost, even its existence. Every design was slavishly cross-examined to see if there were a simpler, more focused, more disciplined way to do the same thing with less. Simple does more with less as a matter of course, but less is more only when less is better. And the genius of the Nano is that it does simple in the most brilliant and efficient of ways.

When the world first saw the Nano, people grinned from ear to ear. And the closer they looked, the wider the smiles got. We attended the launch in Mumbai in the spring of 2009, when the Nano finally went on sale, and we talked with the people present. We talked to people on the streets. And when the car was delivered to the first owners later that year, we talked to them, too.

“If you can’t explain something simply, you don’t understand it well enough.”

Everyone said the same thing: It was a real car, and they loved it. It was an ingenious car and they wanted one. It was an elegant and delightful solution to a problem no one thought could be solved.

There are many cheap products out there in the marketplaces of the world that begin life as a shoddy excuse and go downhill from there. The Nano, like other cars developed to sell for as little as possible, could have gone that route.

But it didn’t. Team Nano, from the very beginning, made the Nano an exercise in elegant design.