When we study radically new business models like iTunes or “impossibilities” like the Nano, the temptation is to pay more attention to the solution than the problem. After all, there’s a lot more glory and sex appeal in the solution.

What do the innovations you are most in awe of—the ones you wished you had invented—have in common? The people who created them really “nailed” a problem. It may have been a problem none of us knew we had, but the inventors clearly understood the need they were trying to address.

How do you know when a problem really doesn’t matter? There’s no easy answer to that. Late night television is filled with pitches for products that may be inventive but don’t really matter. Do you really need one more appliance to chop and dice your vegetables? Maybe you do. But does the rest of the world? Do you really need a blanket with sleeves when you watch TV? Somebody must, because they sell them, but why?

Finding world-changing problems to solve is massively difficult to do. But here’s a hint: if you’re more interested in the technology than the solution, you’re probably heading for a fall.

So the most critical part of Nanovation is finding out whether the problem you think you’re going to solve really matters. And, as we’ve pointed out earlier, you can’t always get that from focus groups and market data. You have to go live where the people are living.

Nanovators have to be very clear on the problems they seek to solve. Albert Einstein’s famous remark, “If I had 20 days to solve a problem, I would take 19 days to define it,” suggests that defining the problem is as critical as designing the solution. 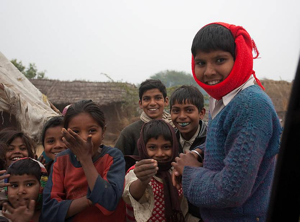 Left: For Ratan Tata and his colleagues, getting these kids the education and health care they need to live up to their potential is a problem worth solving. (Photo: Chris Mayne)